Delicate chocolatey shortbread, ooey gooey caramel and lusciously sweet bananas–welcome to my recipe for this caramel banana tart with a chocolate hazelnut crust.

As is so often the case, this recipe was born out of a need. As someone who loves making my own nut milks and experimenting with different flavor combinations, I always have at least a few bags of nut pulp in my freezer. Although some may throw it away, I have found that nut pulp, which is simply the leftover ground nuts after straining your milk, can be used in so many different ways. In fact, I often end up surprising myself with the delicious results of my constant quest to use up leftover pulp.

The crust for this caramel banana tart is one such delicious result of my culinary experimentations in the world of nut pulp.

Nutella milk, a recipe from the delightful Wallflower Kitchen, is one of my favorite milks as it truly tastes like nutella in a glass. With a winning combination of hazelnuts, dates, cacao powder and vanilla extract, this milk is indulgent, rich and creamy with just the right amount of chocolatey sweetness.

Naturally, the leftover pulp from this milk warranted extra special treatment so I set about creating a recipe that would highlight the pulp while expanding on the flavors already within it.

The result is this extra indulgent tart which features three main flavors: chocolate in the base, caramel in the middle and banana on the top.

With all the caramel in the center, this tart is very rich and definitely a sweet treat (as opposed to a sweet breakfast ;)). On its own it reminds me of a pecan pie what with the nuts in the crust and the date caramel. Paired with a few scoops of coconut cream, however, it morphs into a cross between a caramel-filled pecan pie and an extra-smooth banana cream pie. Talk about heaven on a fork! 😀

Other than the coconut cream, this tart needs no other accompaniments. Serve it at the end of an intimate dinner party with friends along side tiny cups of espresso. Or, for those wishing to hold off on the caffeine and sugar high combo, why not pair a slices of the tart with tall glasses of chilled nutella milk!

Begin with the crust.

Combine the nut pulp and pitted dates in the bowl of a food processor and blend until the dates have broken down.

In the meantime melt the cacao butter or coconut oil in a small saucepan until completely liquified.

With the processor still running, slowly and carefully pour the melted oil through the top hole and continue processing until the mixture sticks together and becomes a cohesive dough.

Preheat your oven to 400 degrees and generously grease your tart pan with coconut oil. Make sure to get the oil in all the grooves on the sides.

Turn your dough out into the tart pan a bit at a time and press it down with your fingers into the shape of the tin. Do your best to make the crust as even as possible.

Poke several holes along the bottom of the crust with the tins of a fork before placing a piece of wax paper over the crust. Fill the paper with a few handfuls of dried beans and place the tart in the oven. The beans will keep the dough weighed down as it bakes so the crust remains flat and even.

Let the crust bake with the weights for 10 minutes before removing the pan from the oven. Carefully take hold of the four corners of the wax paper to gently lift the beans off the crust and away from the pan. Allow the beans to cool on the paper and then replace them in your cupboard for later use or soak them in water and cook the following day.

Place the tart pan back in the oven and bake for another 10-15 minutes until the edges are slightly browned and the dough has hardened a bit.

Let the crust cool until you are ready to assemble the tart.

While the crust bakes, quickly whip up your caramel.

To do this, simply add all the ingredients to a high speed blender and blend for a few minutes until the dates have completely broken down and the mixture is thick, smooth and shiny. Do a taste test. It should taste very much like a slightly salty caramel. If you like a saltier caramel, simply add a bit more salt and blend again.

Transfer the caramel to a small bowl and reserve.

Spread a thick layer of caramel on the pre-baked crust. This can be as thin or as thick as you like and will make up the filling of the tart.

Peel your bananas and slice them into medium-thick rounds. Try your best to make these even so one part of the tart doesn’t get more banana than another.

Now arrange the banana slices on top of the caramel. For this tart I chose a thin rectangular tart pan and found that five slices of banana filled the four inch space perfectly. I went about arranging the topping by picking up five banana slices in my hand and using my thumb to delicately flatten them out so they were no longer standing up side by side but rather laying down in overlapping circles. I then placed this line of flattened banana circles on top of the caramel flush with the tart wall and repeated until there was no more caramel showing.

Your tart is almost ready for the oven. Generously sprinkle the coconut sugar over the bananas and top with some ground cinnamon.

Place the assembled tart in your 400 degree oven and bake for ten minutes. Then turn the oven to broil and allow to cook for another 2-3 minutes, watching carefully the whole time. Leave the tart in the oven just long enough for the sugar to caramelize and brown the bananas slightly, but be sure the crust doesn’t burn!

You can make a sort of cover for the crust edges if they are in danger of burning during this final baking step. Simply take several long thin strips of aluminum foil and fold them gently around the tops of the crust. This doesn’t need to stick to the sides or be too tight against the crust.

When the bananas have caramelized and your kitchen is smelling delectably sweet, remove the tart from the oven and let it cool for a few minutes before slicing.

I like this tart best served with a few small scoops of plain coconut cream, which is simply the solid part from a can of coconut milk.

Enjoy each bite of warm tart with a small spoonful of the cream and your taste buds will explode with a delicious cross between a banana cream pie and a caramel smothered pecan pie. It really is the best of both worlds! 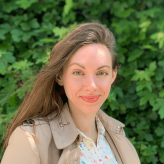